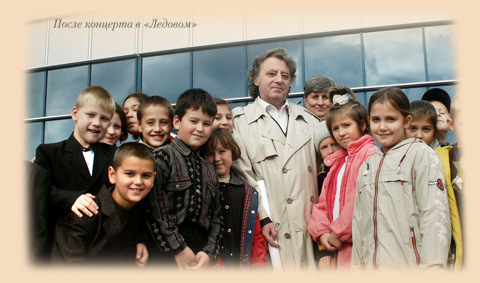 Work with youth occupies a special place in Alexander Kantorov's attention.  Continuing the tradition of Leonard Bernstein with his “Young People's Concerts” which took place in the 1950’s and 60’s in New York, Alexander Kantorov, in collaboration with the A.I. Herzen State University of St. Petersburg established the project “Introduction to Classical Music”. These informal meetings have been running at the University for 15 years and are very popular with students.

The Orchestra frequently tours Europe as well as the United States.  Great success greeted a tour of the universities and colleges of the United States in 1996. At that time, the orchestra received the applause of more than one hundred thousand of America's youth. During the time of his work and travels in each of these many nations, Alexander Kantorov paid close attention to the problem of the young's attitudes to classical music.  Young people have become accustomed to viewing classical music as something of worth only to the older generation.

The principles of Orchestra Classica are to explain to university and school students what the world of classical music is as a source of impressions for people of all ages.  Youth concerts take place in unusual settings, the young listeners also become participants, almost like musicians themselves and occasionally even conduct! Since 2003, the orchestra has realised a programme for school students with the aim to a mass concert audience under the motto “Let's Grow Up Happy!” In St. Petersburg, these concerts take place in such venues as the Oktabrsky Concert Hall, the Ledovy Palace, and the site of LENEXPO and other prestigious locations.  The project has been presented in England, France, the Czech Republic, Japan and the United States.