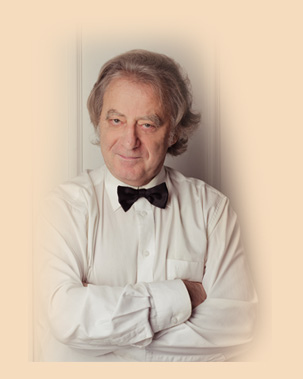 Russian Artist of National Distinction, Alexander Kantorov was born in the city of Leningrad in 1947.  He completed his studies at the Rimsky-Korsakov State Conservatory of Music first, under Prof. M. Vaiman, in classical violin and then, under Prof. I. Musin, in classical orchestral direction.  He began his directorial career leading the Sverdlovsk (now Ekaterinburg) Symphony Orchestra.

Keeping his professional cards close to his chest and preserving the breadth of his directorial repertoire, Alexander Kantorov pursues actively his artistic and educational mission.  He is the artistic director of the Sochi Music Festival.  Reviving the tradition of ‘St. Petersburg’s Musical Seasons’ (whose first concert season was in 1951 under the baton of E. Mravinsky), Orchestra Classica gives concerts in the superb Summer Theatre of our city.  At the base of his ensemble, the conductor leads master classes for young native and foreign conductors.

For many years Alexander Kantorov has been bringing to life his programme of dissimulating the world of classical culture to university and school students.  His efforts rested in founding the course “Introduction to Classical Music” the Alexander Herzen Pedagogical University, where the maestro is a professor.  He also regularly leads concerts for the school students of the city under the title “Let’s Grow Up Happy!”  Maestro Kantorov has been awarded the ‘Distinguished Service Medal’ of the United States of America for his cycle of educational concerts for American youth, which has now met an enthusiastic response in Great Britain.

In March of 2004 Alexander Kantorov was given the honorary title ‘Waltz-King of St. Petersburg.  The crown, as a symbol of this honour, was bestowed upon the composer Andrei Petrov, a citizen of St. Petersburg.